The headline on The Onion reads “No Way To Prevent This,’ Says Only Nation Where This Regularly Happens” 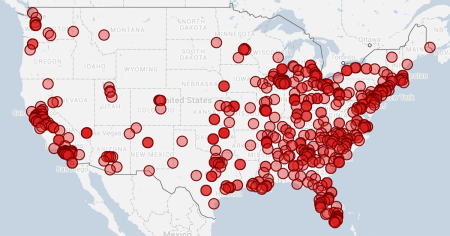 It’s perhaps one of the most biting satirical headlines that they have posted in their 27-year history. Sadly, although it was posted on the Onion’s social media channels after the San Bernardino shooting, it is a piece of evergreen content that has been repurposed many times. When a satirical publication can regularly re-run the same article about a “helpless” nation’s acceptance of nearly daily mass shootings, we have moved beyond satire into meta-satire.

Every time a mass shooting occurs, we can, and do, argue about a lot of things. We are quick to create a narrative that supports our socio-political ideology. We speculate about motives before we have all information. We cast blame, we deflect, we pray, we get angry, we cry, we argue, and we fill up the airwaves with bloviating pundits without actually making one single bit of progress towards saving lives.

Like any number of issues we face in society, there is a constellation of complex factors that play into America’s very unique gun violence problem. There is no shortage of studies, books, or think pieces that set out to address the complexity of the issue. However, regardless of any factors, including political ideology, religion, mental illness, ethnicity, or socioeconomic status, there is one common denominator: guns.

We have a ridiculous number of guns in this country.

There is no denying this fact. 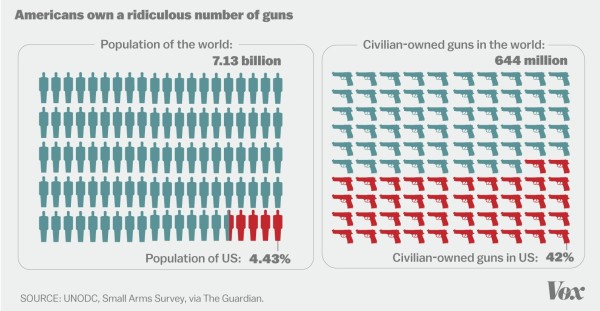 To put in perspective with the rest of the world, the US has 88 guns for every 100 people (think about that — there are almost enough guns for everyone to have one), nearly twice as many guns per 100 people as the 2nd most gun-saturated country, Yemen (54.8 per 100).

Guns per 100 people (Source: The Guardian)

And while other unstable or under-developed countries certainly have more gun deaths per 100,000 people than the US, our gun deaths tower over any other developed country.  The U.S. gun homicide rate is about 20 times the average for all other countries on the below chart. 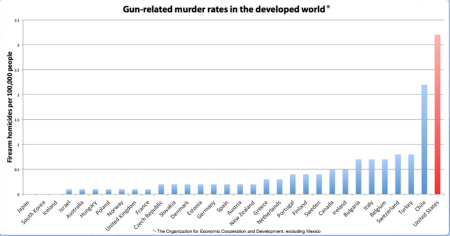 Every time we witness another mass shooting, we hear the same arguments. We hear is that that the answer is more guns (wrong). We hear that mass shootings are usually committed with illegally obtained firearms (wrong).

America is the addict in denial. We have to admit that we have a problem. And while that problem is certainly complex, and may take a lifetime of determination to overcome, we have to want to get better.

We can’t sit around and wait for, uh, the silver bullet to America’s mass shooting problem. Many are quick to try to poke a hole in any potential initiative by pointing out the ways in which it won’t completely solve the problem, which suggests, ridiculously, that if we can’t completely eradicate mass shootings we have no business trying to reduce their rate of occurrence.

As rational, innovative, problem-solving Americans, we often take measures to minimize risk, to increase life expectancy, and to reduce the death rate. Seat belts and airbags have drastically decreased the number of lives lost in automobile accidents. Environmental regulations have saved hundreds of thousands of lives. Food safety regulations, workplace safety regulations, fire regulations, mandatory childhood vaccines — all, without a doubt, have resulted in massive decreases in premature death and injury in America. Have there been rare instances where these regulations have unfortunately led to an undesired result? Sure. However, as rational human beings, we should be in the business of reducing harm. We are smart enough to make educated risk assessments and choose the path that results in an overwhelming decrease in premature death.

Common sense gun legislation can, and will reduce harm. Need evidence? One only need to look to Britain and Australia.

We have too many guns. The statistics speak volumes. We don’t need anecdotes — although the one about the guy in SC who was found to have 10,000 guns in his home also speaks volumes.

Yet, the moment we re-start the conversation (too often, I’m sure we all agree), we are inundated with questions which only serve to distract: How will gun legislation get rid of the guns that are already in the hands of criminals? Are you gonna ban cars/alcohol/swimming pools, too? How can an inanimate object kill someone?

The arguments, the casting of blame, the partisan name-calling, the bloviating, the growing desensitization to mass shootings — none of it does one single thing to reduce harm.

We have to try something. We can’t afford to go on like this.  We can’t accept this as normal.

Why are we so afraid of speech?

Why are we so afraid of speech?

The accidental endorsement from The New York Times

The accidental endorsement from The New York Times

Why women are still marching in 2020

Why women are still marching in 2020

Welcome China: How Things have Changed Since McCarthyism

Welcome China: How Things have Changed Since McCarthyism