I used to think we couldn’t get any less presidential than George W Bush. Then along came Donald Trump. 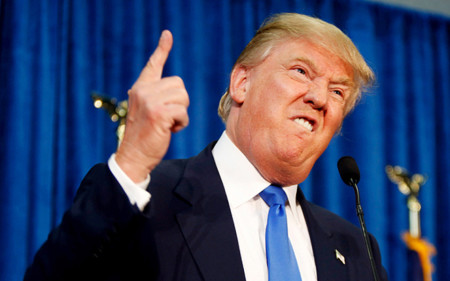 Each week, his comments become increasingly malignant and vile, and yet he continues to lead the GOP polls, by a long shot. Each time he opens his mouth, the dystopian cult-classic comedy Idiocracy plays more like a documentary.

During a campaign stop in Grand Rapids, MI, Trump commented on the much-discussed Hillary Clinton bathroom break during this week’s Democratic debate. Trump stated “I know where she went — it’s disgusting, I don’t want to talk about it…No, it’s too disgusting.”

Trump’s misogyny is showing. One has to wonder if he would have even batted an eye if Gov. O’Malley had taken an extended bathroom break. (It’s been reported that the distance to the ladies room was significantly further from the stage than the men’s, and that Hillary had 45 seconds to get to the restroom, and 1 minute and 45 seconds to do her business and be back on stage.)

The subtext of Trump’s childish comment is that eliminating waste — something that each and every living creature does — is “disgusting” when it’s done by Hillary Clinton, a woman. We are left to assume that he believes a Donald Trump bathroom break is an utterly delightful thing.

Any real gentleman would have apologized for such a remark about a lady’s private business, but not The Donald. He then whipped out the schlong.

Discussing Hillary’s loss to Obama in 2008, Trump stated, “She was favored to win, and she got schlonged.” I’m pretty sure that no matter who you ask on the street, “getting schlonged” doesn’t mean “losing a nomination.”

Reporters and pundits quickly pounced on Trump’s use of the word. ThinkProgress wrote, “‘Schlong’ is a well-known reference to a man’s genitals. There are no alternative definitions for the word, according to Merriam-Webster.”

Trump was quick to assert, via his Twitter account, that the word ‘schlong’ is commonly used in politics.

Never one to be subtle, in his own Trump way, Donald doubled down, using his defense of the word as an opportunity to use it in an increasingly more vulgar way. He tweeted, “When I said that Hillary got schlonged by Obama, it meant got beaten badly.”

We can pretend that Donald didn’t want to put a certain visual of the Commander in Chief and the former Secretary of State in our collective minds, or we can be honest with ourselves and take Trump for what he is: a bratty manchild with the presidentiality of the schoolyard bully.

Let’s set his political ideology aside (as well as his well-reported anti-Muslim and anti-immigration ideologies) for a minute and ask ourselves if we truly want America to be represented by the type of person who publicly states that going to the bathroom is “disgusting.” Or who uses the word “schlong” in a public setting. Or who has called women fat pigs, dogs, slobs, and disgusting animals. Or publicly makes assumptions that a woman must be having her menstrual cycle. Or publicly mocks disabled people. Or publicly states a woman’s face is too ugly for her to be president. Or creepily jokes (multiple times) that he’d date his daughter.

Nearly 40% of Republicans want this guy to represent America.

What is most striking about the arc of Trump’s campaign in 2015 is that he keeps pushing the envelope. He continues to say things that are more and more offensive, vile, and childish. And, like a child, he seems to be testing the boundaries of what he can get away with.

It is not outlandish to wonder if Trump’s 2015 campaign is not some extravagant social science experiment, a performance art piece intended to gauge just how low the lowest common denominator is in America. It appears the bottom is nowhere in sight.

We are getting schlonged. And in this particular instance, we can use both definitions.

Vote by mail is a safe, convenient way to participate in July 14 election

Vote by mail is a safe, convenient way to participate in July 14 election

66 Days of Bombardment from the Propaganda Machine

66 Days of Bombardment from the Propaganda Machine